Welcome to the Chromatotherapy’s official Swiss website !
Chromatotherapy is a old discipline based on the chinese medicine, that is known scientifically (US – France) since the beginning of the XX° century, and improved 40 years ago by medical acupuncturists : Dr Maurice MUSSAT, Dr Georges GUERIN, Dr Georges CORMONT, Dr Jacques SENIOR, Dr Georges SPIDO… which uses colored radiation as energy measurement units.
Each color has a specific electromagnetic radiation which distinguishes it from another. Our eyes perceive the wavelengths between 400 and 800 nm. A specific colored radiation causes steadily a biological and psychological effect on a living organism (human, animal, or plant). The light that is the source of all life explains why this « futuristic medicine » is as effective.
According to quantum mechanics, electromagnetic radiation of the color corresponds to a wave frequency (ν), it will be proportional to the photon energy (E) by the Planck constant (h), or E = h.ν

So each color has a distinct energy.
Thus, living organisms will decipher and understand the colorful radiation (under certain conditions and certainly not in the colorized tubs or other gadgets) as a climate information: Warm – Dry – Cold – Wet or Windy.
The use of Chromatotherapy by doctors and therapists every day confirms the values of this method. The therapeutic implications are considerable. Unlike other colour based therapies that can prove to be intuitive or empirical, chromatotherapy relies on a scientific method.

Dr Maurice MUSSAT, Dr Georges GUERIN, Dr Georges SPIDO, Dr Georges CORMONT, Dr Jacques SENIOR, Dr Lionel QUET, Dr Christian AGRAPART, Dr Ralph LERNER, Dr Annette LEROY,… initiated their theories by studying Chinese energy medicine.
The Chromatotherapy is a Western energy medicine, reproducible and scientifically based, as effective as Acupuncture.
In India, China and Japan energy medicine is not an enigma as it has been practiced for thousands of years. Cartesian Western medicine has been integrated into traditional medicines in these countries, improving the effectiveness of patient care. In the West, Quantum physics tells us that any material substrate is the crucible of a power. Aren’t we living through solar energy?
The Chromatotherapy revives the tradition of Western energy medicine, known since the Antiquity (Hippocrates). It complements the indispensable modern medicine as the human being is not only a piping conglomerate (venous, arterial, lymphatic, nervous systems…).
The use of colors is determined according to the energy field and patient pathology/ies. This therapy like any medicine, in parallel requires an indispensable and complementary diagnosis made by a doctor. An analysis conducted on three levels (anatomy, energy, psychic) will allow a better understanding of the patient pathology. The Chromatotherapy brings a different approach to the disease and its treatments.
The physiological stimulation will not fight against the body defences but uses them. For example, a shock or trauma corresponds to a cold energy. The consequence of the accident is the cold that penetrated the body upon impact. To treat yourself, you use ice and your skin will take the cold ice as according to Hippocrates: « The cold treats cold ».

– Photonic Chromatotherapy : it is achieved by sending colored luminous rays, obtained by a white light going through filters selecting in the visible part specific wavelengths, perceived by the naked eye as « colors ».

1°) The photonic Chromatotherapy is used at three different levels:

A the level of an ailment : when the pathogen agent comes from the environment.
In traumatology, all the pains coming from traumas. Treatment of the sequelae of cranial trauma, improves the memory, attention troubles, anxiety, stress, and depression.
In rheumatology. In dermatology shingles, herpes, burn scars.

At the eye level :
« Central » regulation action at the eyes level with a double effect, psychological and physical. It can be used also for the treatment of sunstrokes or shock.

2°) The atomic Chromatotherapy is used at two different levels:

At the skin level : by local application through the use of ointments including the desired oligo-element.

By oral way : either in liquid form or homeopathic grains. The choice of the oligo-element will be according to the part of the body to be treated. 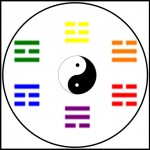