Welcome to the official website of the Swiss Chromatotherapy Association (A.C.S.). Independent school, accredited n ° 2316 by the ASCA Foundation. This medicine is known scientifically (US-France) since the beginning of the 20th century. It was developed, improved and connected to the TCM, many decades ago by the collective research of doctors – acupuncturists : Dr. Maurice MUSSAT (Honorary President), Dr. Georges GUERIN, Dr. Georges CORMONT, Dr. Jacques SENIOR, Dr. Georges SPIDO, and later with Dr. Christian AGRAPART, Dr. Lionel QUET, Dr. Annette LEROY … This discipline from acupuncture takes the parameters of the Chinese tradition: « What is old does not stop and becomes new » (Hiang Sieou III ° century), it uses rationally specific color rays understood as energy / climate measurement units (Trigrams).

Chromatotherapy is a scientific method that allows us to use in a rational way colored rays of light. In a predictable manner each color has on a living organism (human, animal or plant) a biological and psychological effect.

Each color has a distinct electromagnetic energy.

Thus, living organisms will decipher and understand colored radiation (under specified conditions and certainly not in colored bathtubs or other gadgets) as climate information: HOT – DRY – COLD – WET or WIND.

The use of Chromatotherapy by doctors and therapists confirms more and more the value of the discoveries of this method. The therapeutic consequences are considerable. Chromatotherapy is different from artistic color therapy methods that are too approximate, intuitive and empirical. This technique is based on the fundamental laws of light diffraction (Newton) and derived from the energy theories of traditional Chinese medicine (TCM). This approach makes it possible to rationally use millennial knowledge.

Chromatotherapy is a Western-based, reproducible and scientifically sound energetic medicine that is also effective and derived from Chinese Acupuncture.

In India, China, Japan … energy medicine is not an esoteric enigma because it has been practiced for millennia. The energetic and symbolic language of Chinese ideograms (trigrams), through Tradition, reflects a fundamentally universal language. By complementarity, Western Cartesian medicine has been integrated with the traditional medicines of these Eastern countries, thus improving the effectiveness of the care provided. In the West, many so-called « scientific materialists » conditioned by education, maintain a skeptical irony, endowed with obscurantist views and prerogatives denying human energy. Quantum physics explains that any material substrate is the crucible of an energy. Are we not alive by solar energy?

Chromatotherapy revives the tradition of Western energy medicine, known in ancient times under Hippocrates, it completes the essential modern medicine; the human being is not only a conglomerate of pipes (venous system, arterial, lymphatic, nervous …).

The use of Chromatotherapy by physicians and therapeutists increases every day the value of the findings of this method. The therapeutic consequences are very important:

Play with the colors by choosing the ones which are in tune with the patient pathology. This therapy, like any other treatment, needs a diagnosis made by a physician, diagnosis on three levels: anatomy, energy, psychology.

Use a physiological stimulation, don’t fight against the body defenses but use them. A weak intensity colored light (opposed to some phototherapies)   strengthens to the body spontaneous reactions.

Put in front of the white light you use performing filters (to chose precise wavelengths) specific to Chromatotherapy and measure the irradiation time. The results are predictable only after measuring the exposure time.

Use this method in two ways: 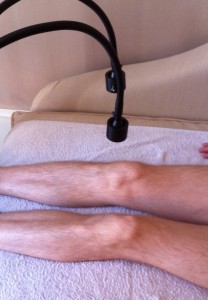